In the Pacific Northwest we are uniquely situated on the edge of a coastal rainforest, where the mountains rise from the sea. These jutting mountains corral the passing clouds, releasing relentless rain on the forest below. Tributaries from the mountains snake to the ocean, bringing sediments and nutrients. The incoming crashing waves unleash their power on the coastal rocks, they are persistent and tenacious. As the tide recedes, it leaves behind stones and shells that have been smoothed and rounded from the sea, rippled patterns along the sand, and tide pools begging for exploration. This coastal juncture is in constant flux, it is evolving, eroding, and recreating. 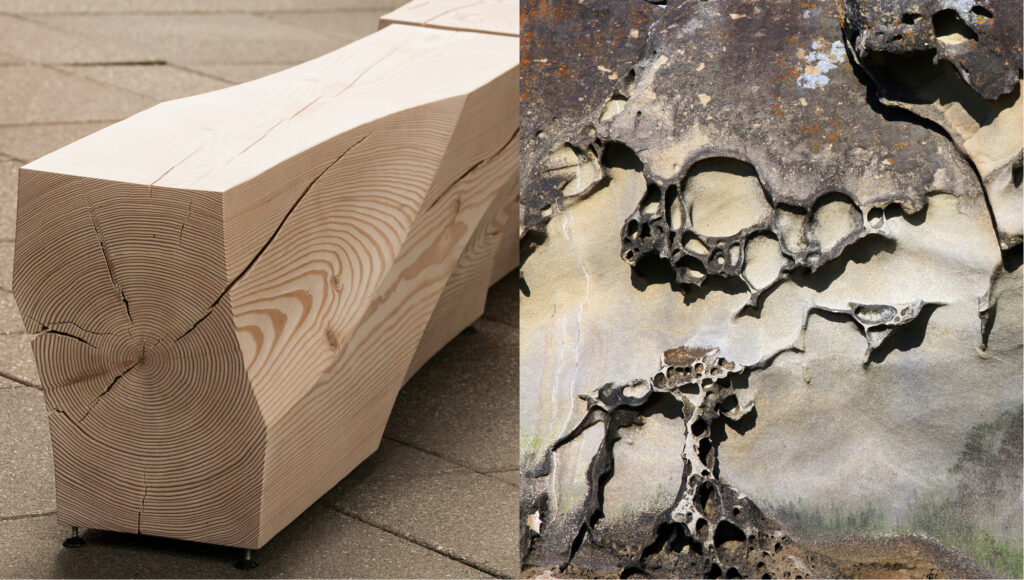 It’s the ephemerality of this juncture, the startling exposure to nature’s rhythms that command one’s engagement. Life and action, transformation and decay, are in constant motion in the surroundings. My own exposure to the dramas at play within the intertidal zone has fostered a deep respect for those forces. By walking the west coast shores, and more specifically in Tofino and Ucluelet, I’ve felt ever more aware of the idea of impermanence and my humble place within the story. It’s an immersive environment, one that engages all the senses. The smells, the wind, and sounds of the waves, forcing one to be present in that precise moment, a moment that will never repeat exactly as it is now. Just as the tide’s movement brings change to the shore, being here, where the land meets the ocean, rejuvenates, motivates, and refreshes.

As the tide advances to the shoreline and retreats, the landscape shifts dramatically. As it ebbs, the foreshore is exposed, green kelp influences a new colour palette and ocean-formed basalt dominates the visual. The rock is stoic and immovable, eroded only at timescales beyond our recognition. As the tide flows back onto the shore, the stone is covered with a slick of water, sending ripples of sunlight across the stone’s surface. Our Intertidal Collection explores the physical relationship between rock and water, as driven by the lunar cycles.

In contrast to the seemingly indestructible basalt stone are Tafoni. Tafoni are seen in the rock along the shorelines of British Columbia’s Gulf Islands. Weathering and erosion has formed patterns of smooth ridges and curves, carved into the surface of the rock. These mysterious arrangements of sensuous rounded hollows and caverns illicit feelings of tranquility in the face of change.

The sea is as undiscerning as it is unsparing and interwoven into the fabric of the environment we see humanity’s touch. At the midpoint of an arduous hike in Haida Gwaii one comes upon the jutting wreckage of Pesuta, a shipwreck from 1928. This unintentional sculpture, forged by nature’s forces, is a reward for the voyage. Our Pesuta Chair pays homage to the effort of the journey, where this natural sculpture stands as the conclusion to a meaningful undertaking.

Where the land meets the ocean is an environment that is as diverse as it is dynamic. The raw power and energy stand in contrast to the intermittent calm. Nature’s rhythms carry on, heedless, sharing the energy that drives all things. This energy drives me, and I gratefully immerse myself within that experience to find some peace and inspiration there.